Home / Load Balancing / CDNs vs. Load Balancers: Which One Should You Pick? 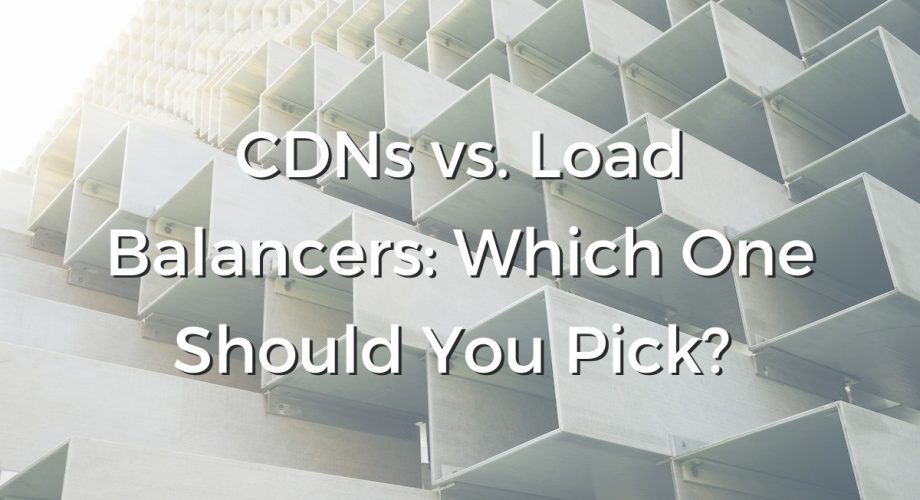 What is a CDN, and what is a load balancer? Essentially, they are utilized to allow for a smooth flow of data between end-users and servers. While they are not absolute must-haves, they are quality-of-life upgrades you would implement for the benefit of both you and your users.

That said, a CDN and a load balancer are two different things. While they both achieve the same goal, they go about it differently. Think of an airplane and a helicopter. While both can fly, they are both very different machines.

Which one should you pick for your network? Well, let’s talk about how the two play a role in your network to help you decide:

What Is a Load Balancer?

Judging from the name, you might think that a load balancer’s job is to balance load across multiple devices. If you thought of that, then you would be right! The primary role of a load balancer is to redirect traffic across multiple servers, ensuring that one is not left overloaded and slowed down while others sit around idly waiting for traffic. The load balancer itself can either be an application on a piece of networking hardware or even a hardware device itself.

What Is a CDN?

On the other hand, a CDN, short for Content Delivery Network, reduces the actual distance between the user and the server. This is done by strategically placing servers around a particular area to do so.

Why is this important? Just like driving a car from point A to point B, the further the points are apart from each other, the longer it takes for data to travel to and from each point. In the networking world, optical fibers have reduced this time significantly by allowing data to travel up to the speed of light.

However, there is still a matter of the devices between the server and the end-user. These devices can include anything from routers to repeaters, all of which process the data one way or another, adding more overall delay. While you can configure your CDN to bypass these bottlenecks, it is not always possible to do so.

Which One Should You Pick?

With CDNs, you can distribute your data to multiple servers across different areas, allowing users to more easily access data without too much delay. With load balancers, you distribute traffic across your servers or cluster of servers to ensure resources are used as efficiently as possible.

So, which one should you choose to maximize your network efficiency? Well, if you can, why not both? While they both achieve the same goal of improving your network speeds and such, they are different devices that go about it differently. In other words, they will not conflict with one another.

Of course, there are certain situations where a CDN will be more preferable than a load balancer and vice versa. For instance, if you are hosting an application just for a specific city, you can get away with only a load balancer. However, if you are catering to the entire country, then having servers distributed throughout the areas will ensure delays are kept minimal.

Why Not Pick Both?!

With all of that said, if you have one already implemented, do not think that you will never need the other. You can never go wrong having both as part of your network infrastructure!

Top-Rated Server Load Balancing Software in the US

If you are looking for load-balancing products, Resonate has got the thing you need! With our software load balancing solutions, we can offer you a variety of services, from global server load balancing to advanced load balancing. Reach out to us now!